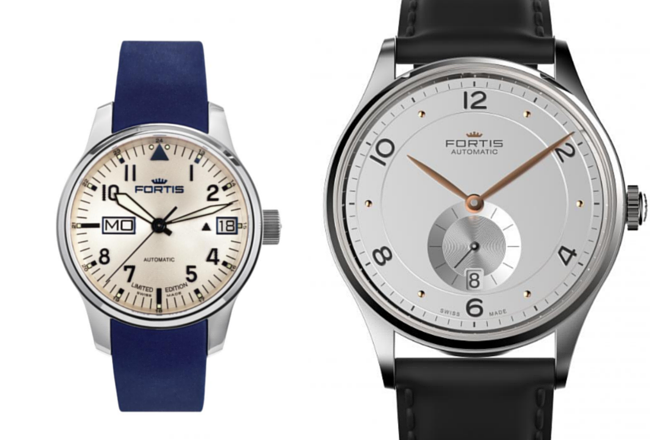 Since its founding in 1912, Swiss watchmakers Fortis have become world leaders in manufacturing quality watches with a multitude of purposes. As a brand, Fortis consists of four key watch collections: Cosmonautis, Aviatis, Aquatis and Terrestis, with each collection having its own unique history…

Space watches need to be highly robust and durable. During lift-off and capsule re-entry, gravity is six times stronger than on earth. Therefore, when the astronauts leave the pressurised cabin of the spacecraft, the watch must be able to contend with sudden and severe changes in pressure. In addition to this, these watches must also be able to withstand the extreme temperature fluctuations of outer space.

In 1994, after passing endurance tests at a physical limit and in open space, the Russian Federal Space Agency ROSCOSMOS named Fortis the official timekeeper for its missions, and Fortis watches became official issue for cosmonauts. Since then, with over 100,000 earth orbits, no other watches have spent more time in space. To honour the extraordinary cooperation of Fortis watches with the Russian space agency, all Official Cosmonauts models, such as the Cosmonautis Official Cosmonauts model, bear the agency’s emblem on their caseback.

The first pilot watch was created in 1904 by Louis Cartier for a pilot named Alberto Santos-Dumont, who complained of having trouble checking his pocket watch while flying. Until this time, wristwatches were worn exclusively by women. In the early days of aviation, pilots relied on watches as navigation tools, and after aviation advances in World War I, wristwatches became the norm for pilots. In the modern day, however, the need for pilot watches for practical purposes has declined, but their popularity as a fashion accessory has remained steady.

The core characteristic of models in the Aviatis collection include striking legibility, sapphire crystal with anti-reflective coating on both sides, and high-pressure resistance. An example of an Aviatis model is the Fortis Aviatis F-43 Recon. This unique timepiece combines high functionality with sportive elegance, and was specially made for Fortis’ 100th anniversary.

Historians believe that diving may have started as early as 5,000 B.C. However, it was to be 1000s of years until crucial and reliable equipment to accompany divers could be invented and developed. In 1943, Fortis introduced one of the world’s first waterproof watches, the Fortissimo, and from then on remained one of the leading forces in the development of waterproof watches. Today, over 70 years later, the models of the Fortis Aquatis collection embody the perfect symbiosis of award-winning design and uncompromising functionality. Modern models, such as the Fortis Aquatis Marinemaster White, have characteristic turning bezels and distinct crowns, designed for perfect handling under extreme conditions. Containing state of the art Superluminova, this model glows bright and is therefore perfectly visible in even the darkest of waters, while being water resistant for up to 200m.

Like the look of any of these watches or want to check out the rest of the collections? Head over to Page and Cooper, who have been appointed exclusive dealership for Fortis watches in the UK.