May 12, 2013
Yesterday, if you had mentioned crochet, menswear, and LCF ‘Collection of the Year’ award in the same sentence, I most likely would’ve spat “INJUSTICE!” in your face. Now, though, I’ve had my tune entirely changed having pored over the stunning designs (which meld together crochet and razor-sharp tailoring) of LCF grad and Collection of the Year award-winner Matteo Molinari.

As you can imagine, it’s nigh on impossible to see these pieces and not want to interrogate the genius who fashioned them in the first place so, without further ado…

MM: You studied communication before turning to the world of
fashion design. What led to this decision? And why
menswear as opposed to womenswear?

M Molinari: I have a BA in Communication and an MA in Philosophy of Languages and Semiotics.

My previous residency was Bologna,
the oldest university in the World. My decision to study there for my BA and
MA was not random: in Bologna there is a department active that
works exclusively on semiotic and related disciplines (as in
philosophy of the languages, linguistic studies, logic, analysis
practices for art, mass media, photography etc).
This is quite unique, my department was the only in Italy
and one of the few in Europe. 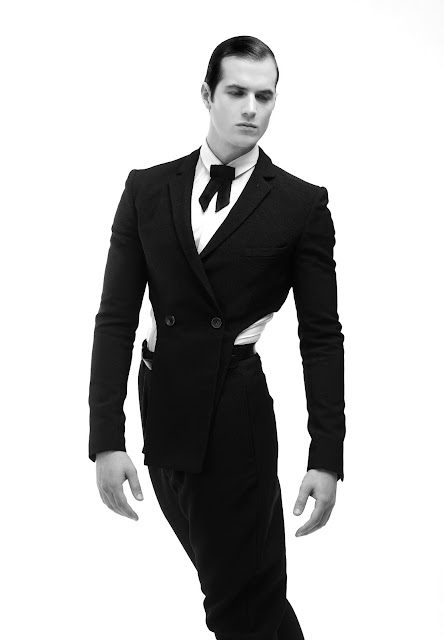 I studied communication in the widest sense of the word: from
written pieces and literature, to the analysis of art pieces,
performances and cultural artefacts. Not just mass media or
magazines; actually, I specialized in something very different:
interpretative semiotic, phenomenology and post-structuralistic
analysis practices with a final thesis about the silhouette and a
proposed methodology of fashion analysis based on the
works of Roland Barthes, Charles Sander Peirce and many
others. 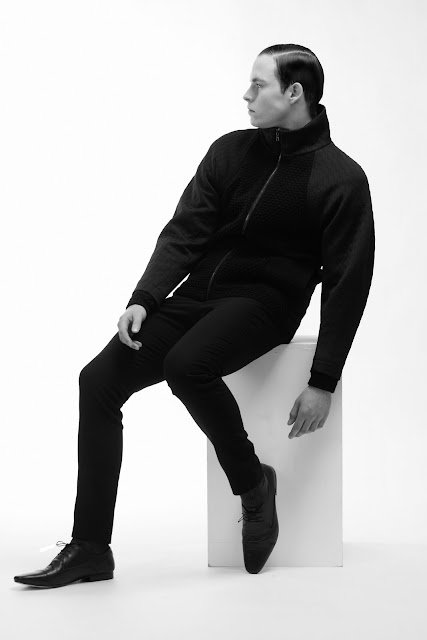 After so much theoretical exercise I felt the need to apply my
knowledge to the fashion design practice so I applied to the
MA in Fashion Design and Technology at LCF. 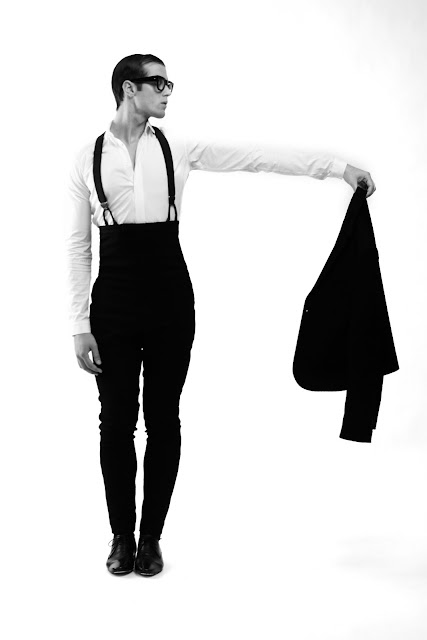 About the differences between menswear and womenswear I can
say that these differences are not just based in the kind of clothes, which are suitable for one or the other gender; the differences are more
culturally and sociologically based. I see my design research and
production as a practical investigation of what ‘male’ and
‘female’ mean. My sometimes androgynous aesthetic is a reflection of
this. So I don’t see a very deep and stable separation between
womenswear and menswear. The borderline is continuously re-
negotiated in the design process. 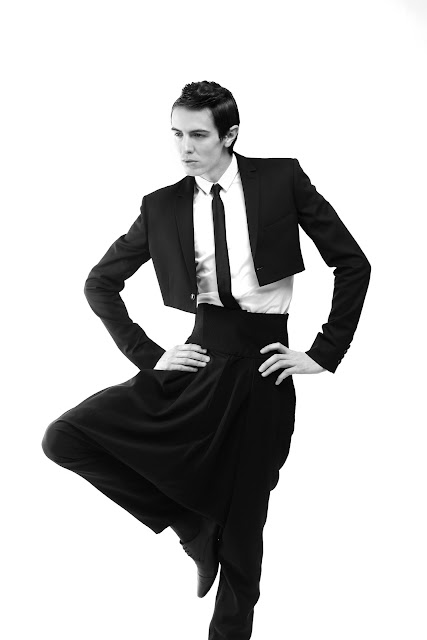 MM: I see traces of everything from matadors to Raf Simons in
your MA graduate collection. What was your inspiration?

M Molinari: I was amused by the notation which highlights the movements
necessary to produce a piece of crochet lace. Small dots, lines,
and circles printed on a white page can create an intricate and
beautiful piece of work if correctly interpreted by a skilled artist.
I developed my patterns starting from the crochet panelling. I
used crochet not like an embellishment but as an important part of
the pattern. 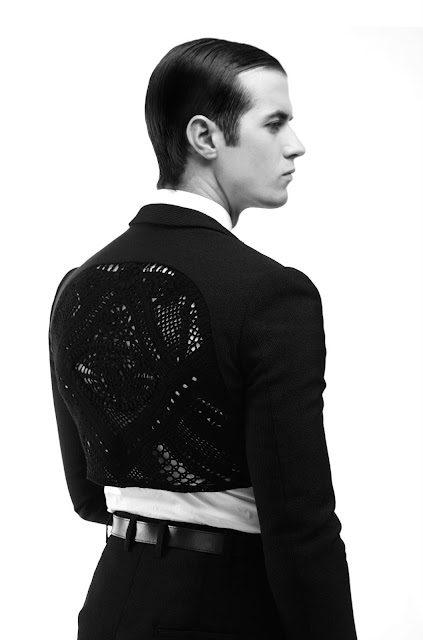 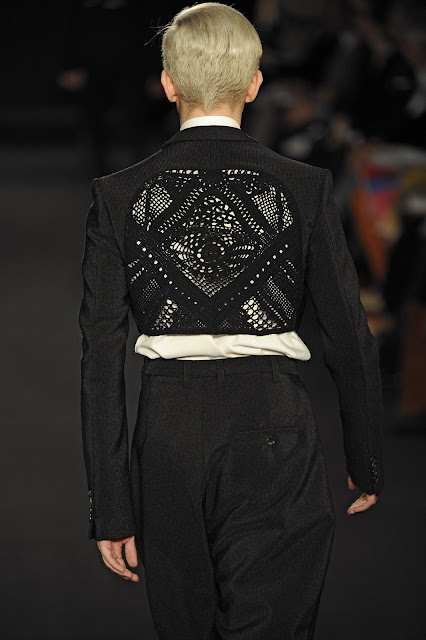 Crochet is a feminine technique, a knowledge shared between
mothers and daughters in Italy. Doing menswear based on it
pushed me to reflect about a lot of social and cultural implications of gender, differences between art and craft and the non-natural but merely cultural concept of masculine and feminine.

MM: Your collection plays with silhouette, exaggerating
proportion and yet remaining elegant and wearable all the
while. Was it your intention to focus on cut and silhouette in
particular?

M Molinari: Usually young designers are experimenting more with extreme
styles and eye-catching proposals and weird looks.
Keeping that in mind, I tried to be different taking the
traditional men’s wardrobe as my starting point, working on men’s essentials: the
suits, the trench-coat, the coat and the white shirt. I changed
proportions and I developed a silhouette, a persona: sharp for
tailoring and structured and architectural for the coats adding the
cross-gender twist of using handmade lace in a graphic and
masculine way. 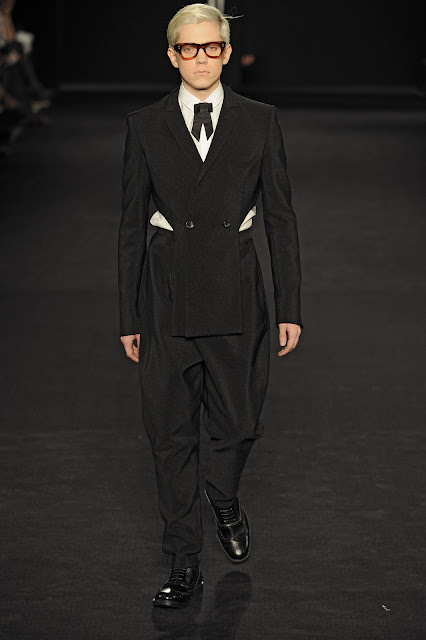 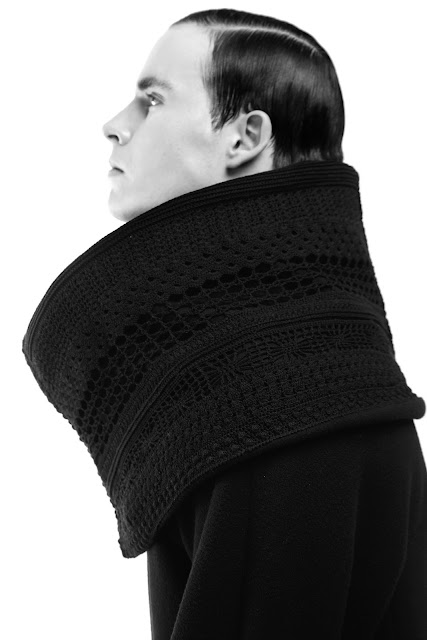 I’ve been focused on tailoring and hand-made crafts because
these elements are a huge part of my Italian heritage.
It sounds like a stereotype but I pay so much attention to the
pattern-cutting process to get the shapes I wanted. The silhouette
is distinctive and the cut of the clothes, accurate and thoughtful.
The quality of the clothes was a central element.
The structure of the collection reflects it: tailored pieces,
coats, trenchcoats, shirts and high waist trousers, no fancy,
draped or overstyled outfits.

MM: Many might see crochet as something exclusively for
women interesting in reviving the 1970s but you seamlessly
work it into your tailored pieces. What attracted you to the
art of crochet?

M Molinari: I am attracted to the mathematical nature of the crochet
lace. It’s a well known fact that some crochet stitches have a
geometrical fractal nature and development. This element attracted
me to develop a collection where the crochet was not a surface
embellishment but the starting point of my pattern cutting. I
designed and created the crochet panelling first and, according
to them, the rest of the garment in woven fabric.

MM: What was the highlight of designing and then showing
your MA collection?

M Molinari: Personal satisfaction and a great chance for exposure for my
work and the way I intend for modern male fashion to be. 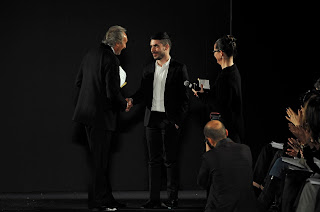 ^ Molinari wins Collection of the Year, presented by LCF Alumnus and Chairman of the BFC Harold Tillman. 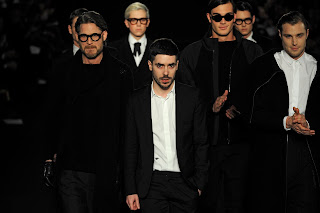 MM: What are your plans for the future?

A spring summer collection, some design collaborations and a
more theoretical developing of my work on heritage and hand
made techniques.

Catwalk: The Cult of Christy Turlington.