August 11, 2009
Must ‘fess up. I’m not the naturally-handy-about-the-home type, nor do I brighten with excitement at the thought of physical labour, but fruit-picking in the sun is a welcome exception (yet more welcome when it’s apple-picking…pluck one and they all – in pure lemming fashion – plunge to the ground). This, in combination with all the wall-painting and furniture-restoring I’ve been occupied with lately, not only grants me this confidence that assures I could take on any handyman’s job (v. dangerrrous, since I’m lucky if I can hammer a nail straight) but also has me pondering suitable attire for such tasks.
Basically, I’ve got utilitarian-wear on the brain today, which is – you must appreciate – entirely alien to my wardrobe’s default inclination. Being the younger of two sons and closer in age to sisters than the bruv, I spent my time chiefly learning the ropes in the kitchen rather than the workshed and never really felt anything remotely resembling appreciation for the workwear which constituted the majority of my father’s wardrobe.

^ GAP FW09 – No, I’m not that convinced of this whole mode of dress that I’d sport the entirety of either of these looks, but the roll-down, slouchy boots combined with the thick socks are surprisingly appealing. Thanks to 00o00 for the first look. 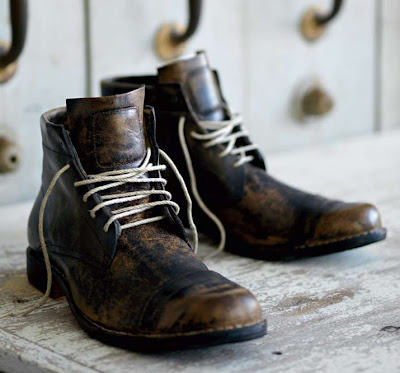 ^ Timberland FW09 Counterpane Captoe Chukka – Almost a year ago, now, I embarked on a mission to secure a pair of dashing chelsea boots. It was an epic fail. These more than ease the disappointment, though. ^ Miharayasuhiro FW09 – The slouchiest of silhouettes offset with the strength of a decidedly sober colourway and boots…again. Yes. ^ Bottega Veneta FW08 – Fashion purists avert your gaze, this looks is a whole year old after all! *gasp* Regardless, it’s still plenty relevant. BV boiler-suits (with boots) will always be relevant. But don’t blame me if you’re boss isn’t keen on officewear inspired by the above.
Now, however, what with all the highly desirable interpretations of workwear available I’m slowly warming to the concept. Last season’s lumberjack-love (check shirts surely never saturated the market to such an extent?) I just didn’t buy, but with re-workings of labour-staples: denim shirts, work-boots, distressed-finishes and boiler-suits, I’m thinking channelling DIY-demigod is the order for AW. Easy on the plaid, mind.
Images from Raymond Chiu, Men’s Style and 00o00
Previous Post